Who's running this show? 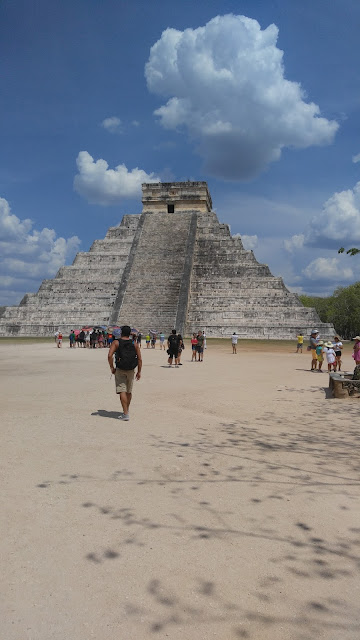 “I’m my own boss to the first time in my life,” I told a fellow tourist at a rest stop on our way to the Chichin Itza Aztec ruins on the Mexican mainland in the state of Yucatan. “I’m 65 and I’ve never lived alone,” I continued to her attentive ear. “I went from my parents’ home to college communal living to my first husband to my second to my third, Roger, love of my life for 22 years.  “Now that he is gone—“ “Oh, I’m so sorry.” I waved it off, saying, “I’m OK. It’s just…different.  Being my own boss.”


With that, we were summoned back to the tour van to motor on to the ruins. “To be continued,” she remarked, leaving me to wonder, “What do I really mean when I say I’m my own boss for the first time in my life?”


Certainly, my parents bossed me. Parents do their jobs. My second husband was überbossy, beyond the point of emotional abuse.  (Ergo divorce.) Throughout my marketing career and teaching gig’s, I had platoon of bosses , er, supervisors. And supervisors’ supervisors with a range of capabilities from none to superlative. I am a boss of others: Husband #1, a few hundred students, and a score of professional staffers, among them the administrative assistant who gave me a Boss Lady mug nearly 30 years ago.


Last, I have to confess, late in our life together, there were moments I bossed Roger around. One time I went totally pissed-off parental unit on him, which evoked a most sobering plea, complete with watery blue-eyed appeal, “Don’t treat me like a five-year-old.” And I never did again. That’s not our way love worked.


But why this boss metaphor? Am I being bossy with myself? Bossing myself around? Not exactly a desirable trait. People don’t generally like much less admire bossy people, right? I don’t. Fortunately, because I’m disciplined by nature and nurture, when I tell myself, “Get the bloody blog post written,” it’s not in an imperious tone. A gentle nudge is enough.


I think what I really meant to say to the women at the pit stop was, “I don’t have to answer to anybody but myself for the first time in my life. I order of the day.  I stay up all night if I wish, as I did twice this winter.  Until sunrise.  And book an impromptu cruise that brings me here to Belizean waters. Take mid-morning naps. Swim whenever. Walk wherever. Explore Aztec ruins. Write anytime, anywhere, on full-time poetry safari.


But no Roger, heavy sigh. No children. No pets. A score of good friends, many cherished correspondents, a circle of poet-pals, a circle of humanists, but no one in loco parentis calling the shots. Only me. I am the boss and she is in after all. I answer to myself. Karla Linn, it’s time to hoist your butt out of the deck chair and scatter some ashes into the turquoise Caribbean Sea. Let it be. Or, as Roger would say, “Bouga, bouga.” 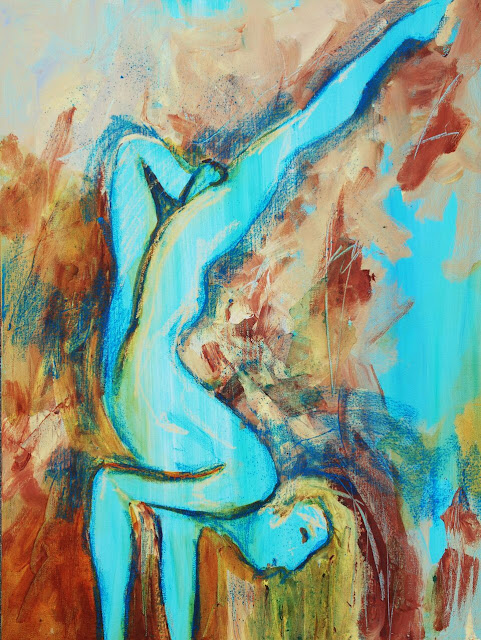 Psyche’s Scroll Is in Utero

My newest book, Psyche's Scroll, is in production for release this Fall from The Poetry Box Selects.

Psyche’s Scroll is a post-postmodern book-length poem that invites readers to participate in a woman’s psycho-social self-analysis as she struggles to move through and beyond psychological trauma. Readers become voyeurs of the mind in a book of sometimes bawdy, ballsy language, as well as sharp insights into human behavior. Unpredictable, unconventional changes in cadence, form, and patterning makes for an enriched poetical read.

Psyche’s Story is myth-making, it’s a love story with a geeky streak. It’s also a schizophrenic story: half raw emotion, half coolly cerebral. American master poet William Heyen referred to Psyche’s Scroll as “sui generis.” Poet, blogger and editor of The Centrifugal Eye, Eve Hanninen, called the book “a romping good read. I think you have a winner here.” Book reviewers might identify Psyche’s Scroll as: “a hyper-contemporary tour de force.” “gutsy” “forthrightly sexy,” and “this epic poem pushes at the frontiers of what is possible.”

The image above will be the cover art for Psyche's Scroll. It was painted by Nard Claar and is titled "Inversion."  Oh joy!
~~~ 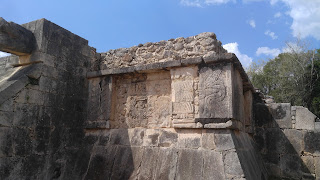 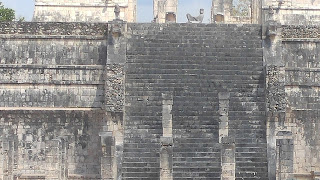 About those Mayan Ruins at Chichin Itza

Chichen Itza was a large pre-Columbian city built by the Maya people of the Terminal Classic period. The architectural site is located in Tinum Municipality, Yucatan State, Mexico.

Chichén Itzá is a complex of Mayan ruins on Mexico's Yucatán Peninsula. A massive step pyramid, known as El Castillo or Temple of Kukulcan, dominates the ancient city, which thrived from around 600 A.D. to the 1200s. Graphic stone carvings survive at structures like the ball court, Temple of the Warriors and the Wall of the Skulls. Nightly sound-and-light shows illuminate the buildings' sophisticated geometry.

Yes, it's worth the adventure to get there.  Just try to avoid the 94-degree wide-open sun in mid-afternoon. And, don't be disappointed:  Visitors are no longer allowed to climb the temple steps.

Please enjoy more of my poetry with this further reading: