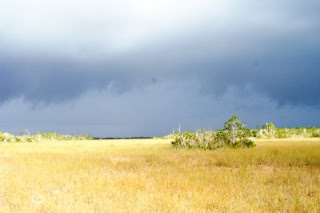 Thick the limestone base
but porous; ancient raindrops
garnered quench all thirst.

This river of grass
harbors pineland keys – soughing
an ocean of wind.

Tomorrow (December 15), my husband Roger and I leave for the winter...heading south once again as snowbirds to warmer climes. As usual, we'll be playing "campground hobos," staying at a number of state and federal campgrounds in Georgia and in the Sunshine State.

But one change in our usual travel routine is in store: The Everglades National Park Artist in Residence in Everglades (AIRIE) program has named me its resident artist for February 2009. The program, which provides an on-site apartment in the heart of the park, offers artists the opportunity to live and work in this unique environment. The poems I hope to complete under this program will contribute to the public understanding and appreciation of Everglades National Park. It is hoped that these works will characterize the Everglades for present and future generations, giving park visitors and the general public an opportunity to see our heritage through the eyes, and ears of the contributing artists. I will have the opportunity to interact with park rangers and give poetry readings during my stay. This is my favorite place on Earth. That I will have unfettered time to write, write, write about it is a once-in-a-lifetime opportunity. I’m so grateful to be an AIRIE poet. I'm also grateful that Roger has been so obliging about my two-week disappearing act. He'll be tucked into a lovely little campground on Chokoloskee Island in the Western Everglades ... no doubt reading, reading, reading while I go about a quiet writer's life. Look for updates in future posts.
Meanwhile, it's time to hit the road.
Posted by Karla Linn at 9:42 AM No comments: 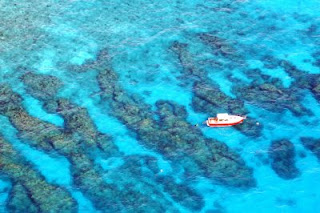 As we head into the holiday season with Thanksgiving just around the corner, arctic cold has settled over western New York, thanks to the gale-force winds called Alberta Clippers that have barreled south out of the high north. Even folks in the deep south are feeling the chill, so reports my friend and poet Beau Cutts from Georgia. Brrr!
So I'm trying to think warm thoughts and have been looking at photographs from trips to balmy Florida in winters past. I took this photo of coral reefs and mangrove islets in the Florida Keys from the front seat of an open-cockpit biplane last winter. I ponder the turquoise water and imagine snorkling off the bow of the fishing boat. My fingers and toes are still cold, but I'm warmer inside.
Among the many, many things for which I am thankful for this season, not the least of which are my husband, family, friends, and President-elect Barack Obama (!!!!!!), I'm grateful to a fellow named James Penha, editor of The New Verse News (http://newversenews.blogspot.com/), who nominated my poem "The Shells" for a Pushcart Prize, one of the more prestigious literary accolades. It was a first for me and I'm honored. It also came as quite a surprise. This poem is one of my few anti-war poems, kind of a black sheep in the body of my work. So to have it singled out for a Pushcart nomination was a most pleasant shock. The poem is a reminder that our country is still at war...these five-plus years later from the "eve of the war in Iraq" of which the poem speaks.
Now at least there's hope that the war will come to an end. I dedicate the poem today to Barack Obama, peacemaker.
The Shells


On the eve of the war in Iraq
she was contemplating opercula,
small doorways of protection for snails
—ocean’s moon snails, slipper snails, also
augers & whelks of more intricate shells.

On the eve of the war in Iraq
she reminisced about hermit crabs
that tuck their tender hind ends
into any abandoned shell that suits,
taking shelter from predators.

On the eve of the war in Iraq
loggerheads in their formidable shells
were yet far off shore, so she touched
instead six silver turtles pinned to her vest,
gesture to totems of spiritual safety.

On the eve of the war in Iraq
she was reminded that she is:
human, she has no shell –
only the simulacrum of the warriors’
so-called shells that were put to use
on the morning of the war in Iraq.
***
Happy holidays. Remember: Celebrate Earth!
Posted by Karla Linn at 5:03 AM 1 comment: 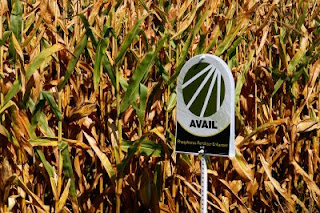 
Acres of August corn crowd
to the shoulders on four corners.
I creep through the intersection—
cautious, aware: I am in over my head
in fields to every horizon.
The corn hovers above like an army of green
seraphim protecting me as far as I can see.

I slow down driving between their handsome ranks.
But the stalks are restless, like me,
as if wrestling with competing personalities.
On the outside, the plant admits to chaos—
its tassle-do tossed by stiff mid-day breezes,
and, like my own gray hair, its silk tangles
But beneath the husk all is tidiness.
Each sweet ear I bite into this autumn
yields six hundred kernels, arranged in even bands.
So orderly, the kernels of corn I swallow.

I come to a full stop
thinking of Mayans, Huicholes, the Anasazi,
and other peoples of the corn.
I pull off to the side, park, get out, push into
the rows of corn near Peter-Smith and Lakeshore;
I join the spirits in the maize.
***
The Autumn Equinox occurs tomorrow at 11:44 EST...and the fields are full of the season's bouty--corn, pumpkins, cabbabes, beans, carrots, apples, pears... After a delicious summer (som much fresh seafood!) in the Canadian Maritimes (alas, without email most of the time and few opportunities to update my blog!), I've settled back into the routine of teaching freshman writing, visiting with friends and enjoying the beauty of Lake Ontario in my front yard. It is indeed a blessing to be home.
Posted by Karla Linn at 1:03 PM 2 comments:

In the Poetic Forest

The Bashō Trees of Acadia


Northern forests in the east
are littered with brief poems
written in white bark code
on curled scrolls peeled
from paper birches.
Each is a secret haiku
scripted in dashes to read
like Braille with your fingertips.
I retrieve one scrap hidden
in the duff by Jordan Pond,
ponder its lines embossed
on papyrus, deciphering:

While the above poem was written in Maine's Acadia National Park, I remain in Acadia -- up in the Canadian portion of that land once widely settled by the French who were later ousted from New Brunswick and Nova Scotia when the British took control. Many of the deported French ended up in Louisiana and became known as Cajuns and were immortalized in Longfellow's poem "Evangeline."

Acadia is a land of birches, firs and granite...a magical land. And today, a special treat: the ferry across the Bay of Fundy from New Brunswick to Nova Scotia. Fundy! Site of the world's greatest tides -- a shift from low to high (or high to low!) up to 48 feet. Such a tremendous tide that you can stand at water's edge and watch the water rise to your feet or ebb away minute by minute. But today, a different view: from atop the bay's great waters on the ferry boat Princess of Acadia. 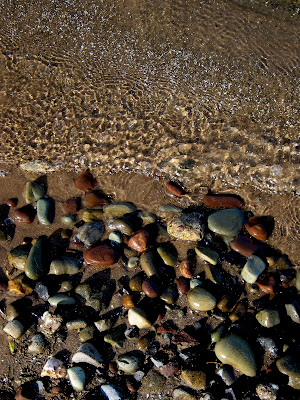 
Who first called it fair?
Who first named it haven?
How long ago were the thoughts
first twinned in the minds of mapmakers?

I have it on good authority
from season’s first dragonfly
along Ontario: It was a pair of them.
The gander saw her fair;
the hen had found in him a haven
for seven goslings to be raised
on a sterling—his idea—pond,
her word for their home of reeds.
Since the end of the last Ice Age,
its great glacial retreat,
Canada geese have claimed
these south shore marshes.
Despite red-tailed hawk visions,
shadows of turkey vultures,
the arrival of man, me,
this species thrives.

Tonight I sleep in Fair Haven
on the bluff above Sterling Pond,
in the company of Branta canadensis.
Tonight I dream the voice of the goose
is yet heard in the wetlands
eight thousand generations later.
I dream the birds’ long aquatic history
and lore of this place on the charts. Again,
I make their fair, sterling acquaintance.
Tonight I swim in protected waters. 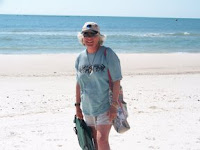 Spring hasn't quite arrived in Western New York, so I sure wish I could walk back into this beach scene in a photo taken on St. Joseph's Peninsula State Park a couple weeks ago.
Chilly and rainy and gray in Kent, N.Y. It's definitely not shorts and sunglasses weather. But it's good to be home...visiting friends...entertaining...sleeping in my own bed...and listening to the thousands of geese in the fields behind the house as they commute to and from Lake Ontario.
Posted by Karla Linn at 11:50 AM 1 comment:

Reflections in the Longleaf Forest

Ochlockonee River State Park on Florida's "Forgotten Coast" region of the panhandle is my favorite state park. There's a serenity there engendered by the tall soughing pines and the almost imperceptible hiss of the river as it slips across the sandy banks on its daily unhurried rise and fall with the tides. The longleaf pine, my favorite evergreen, is endangered; only remnants of the great forests that stretched from Virginia south and west into east Texas remain. One such pocket of sylvan glory is at Ochlockonee, where you can also, if you take a lesson from the river and move quietly, slowly, see a red-cockaded woodpecker, endemic to the longleafs and also endangered.

I saw the bird; I breathed the tangy trees; I reflected. There's still time to save them both.

Sunset at Chokoloskee, a small, sleepy "old Florida" island on the edge of the Western Everglades, 10,000 Islands area.
Posted by Karla Linn at 4:53 AM No comments:

Sunshine on My Shoulders

Warm Florida greetings to all. It has been a busy time for this vagabond poet. Writing, of course, but also meandering bay and estuary by kayak and beach and forest on foot trails along the Atlantic coast, into the Keys, and now on the Gulf coast, where I'm making my way slowly northward as the days grow perceptibly longer.
One of the best days so far I spent alone on Cayo Costa, a small barrier isle on the Gulf coast accessible only by boat. I spent the day on the beach writing and bird watching, cloud watching with no one in sight despite the perfectly sunny, warm day. The solitude was refreshing...and inspirational. Hence:
In Order