That Certain Mojo of the Amazon 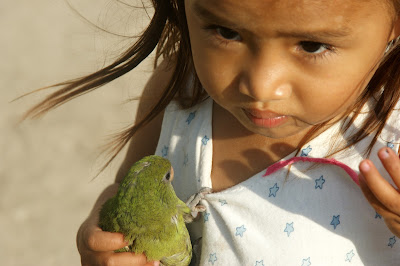 I imported small doses of Amazon mojo
in my photographs of mestizos children,
brown eyes shimmering in brown moon faces daring
to gaze away from my gringo wide-angle lens at full zoom.

One little chiquita wore her pet parakeet like a parrot-
green pendant at her throat, stroking him, soothing
herself, that bird of green-green palms in her brown palm.
The caption reads: She tamed him, he turned her wild.


It has been difficult returning from our journey to the Mother River. Two weeks-going-on-three later and I’m still feeling a bit weary, plowing through emails and huge baskets of laundry.  Ah, return to reality.

Here’s an update since I posted a quickie on Facebook at the end of September. As many of you know, Roger and I had a fabulous trip during which we saw dozens of birds (89 species), 53 of them "bird firsts." And lots of other critters, the most amazing of which were the pygmy marmoset (world's smallest monkey) and the monk saki monkey, a very rare sighting of a handsome furry primate!  Brought home a couple thousand photos, now in photo-book-making mode. Well, it was until I got distracted by this beautiful young face..

Of the 31 bug bites I suffered  plus 1 no-problem bee sting, only three still show signs of attack. But I still can’t shake it: that we were attacked by a swarm of a couple thousand bees -- freaked me out totally even if it turned out they were harmless, stingless bees that only wanted our sweat!  Lesson learned: the rainforest is a dangerous place and humans are insignificant!  Best moment?  Being on our boat, the elegant Delphin II, as it entered the confluence where the Amazon begins!  Absolutely thrilling to be in the current where the world's mightiest river becomes what we know as the Amazon!

Which brought me around to the image I posted here today…and for this special occasion (finally getting around to doing my blog), a poem, brand-new today and written expressly for you.  A thank you for continued reading of my sporadic postings.

And here now is a short poetry news round up for you:

1)      I invite you to read my work at Sliver of Stone at http://sliverofstonemagazine.com/threading-desire/.
2)      The most exciting news is about Rochester’s Poets Walk. After many, many months of deliberation and selection/design work/and construction, Poet's Walk is officially open as of October 5th! Poets Walk is an interactive sidewalk along University Avenue between North Goodman and Prince Streets in the heart of the Rochester arts district that honors poets as artists of the written word. The sidewalk is made of all natural materials - clay brick and stone - and built to last for 100 years or more. Poetry is engraved into eleven granite bands in the brick sidewalk, as well as two large granite tablets. In addition, about 100 small medina stone tablets scattered the length of the block will be engraved with words. Visitors can dial the words on their cell phone to hear audio recordings of community voices performing poetry written by area poets, or poets who visited Rochester at some point and are recognized or historically significant.

For an overview of Poets Walk, go to http://artdrop.democratandchronicle.com/poets-walk. Scroll down to the alphabetical list of poets where you can click on a link to read a poem or click on the megaphone icon to listen to a recording of the poem. Or, to listen to a poem, dial 585-627-4100. When prompted for the stop number, enter “tast” and the phone will direct you to my poem, “Six Questions Now Answered.”  The reading at the opening ceremony was a great success.  I’m so very honored to be among the poets with such fine company.

3)      Community was very much behind the “guerrilla poetry” event called “Chalk Talk” in the Village of Brockport recently.  I and three other poet-friends from Just Poets (the local poets’ non-profit org), took to the sidewalks with pastel chalk in hand to write spontaneous verse in front of Lift Bridge Bookstore. People stopped to read and question our actions and pick up the chalk themselves.  The  effort was part of the worldwide enactment of 100,000 Poets for Change.  Take a peek at what we were up to at http://100tpcmedia.org/100TPC2012/2012/09/brockport-new-york/. So very glad to be there with poet-friends Dwain Wilder, Colleen Powderly and kitty Jospé.  We had a blast while bringing poetry to life for passersby of all ages.

4)      Last but not least, I got word in the past couple weeks,I've received the Dr. Sherwin Howard Award for the best poetry published in Weber - The Contemporary West in 2012, which carries a $500 prize.To read the winning poems, go to https://www.weber.edu/WSUImages/weberjournal/JournalPDF%27s/Spring%202012%20for%20web.pdf.

5)      And, if you’d like to read about another happening poetry city, enjoy Scott Owens’s  article at http://scottowensmusings.blogspot.com/2012/10/provincialism-in-charlotte-observer.html.  Scott’s an acclaimed North Carolina poet and editor (he's published several of my works) who takes on the provincialism that can beset our hometowns whether in Charlotte, NC, Rochester, NY, or anywhere people don’t treasure their hometown poets’ treasures!

Roger and I will be heading south on November 6 (after we vote!)  in the wake of the Canada geese now raising a racket overhead these days.  A few days of moseying, stopping to visit four sets of friends on the way to warmer North Fort Myers for a winter away from this ch-ch-chilly north! Then I’ll return to these pages and send some of that warmth your way.

As always, thanks for reading.  Happiest of autumn trails to all.