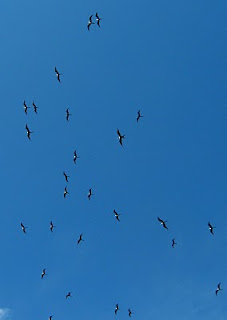 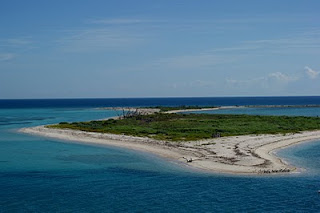 New Year's Is for the (Tropical) Birds

Roger and I spent New Year's Day on Garden Key in Dry Tortugas National Park, a constellation of small tropical isles 70 miles west of Key West and actually closer to Cuba than the Keys!

After a tour of Fort Jefferson (once a prison for Confederacy soldiers during the Civil War) and some snorkeling (notherin to write home about, alas, but the water was soothingly warm), I stretched out on my back on a beach blanket under the warm subtropical blue skies and watched some 50 magnificent frigatebirds wheel effortlessly across the blue. It was a half-hour of pure bliss.

We also had a close encounter with a burrowing owl who was not burrowing but rather perched in a niche in the brick walls of the ammunition repository at the fort. Who, who, who knows what he was doing 70 miles at sea on a small Gulf island!

Tomorrow we'll be back in the Everglades for a week of hiking and kayaking in my favorite place on Earth! And, as 2009 National Park Artist-in-Residence, I'll have a return engagement with a poetry reading on the 9th at the Coe Visitors Center.

From there we'll be settling down in the Western Everglades' Ten Thousand Island area for a month on Chokoloskee Island. More to come from the Gulf Coast!