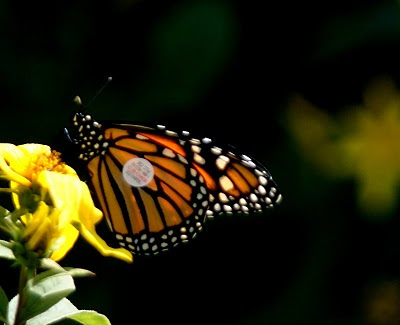 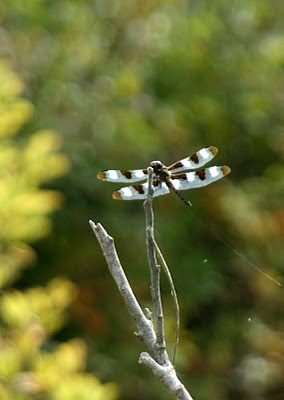 Last night the wind
in a rush shifted
south to north swish
goodly wind, tail wind
wing wind,great wind of insects
seeking passage out of Canada
by the legions while there's time
dragonfliers in formation
sporting their dozen spots
monarch butterfliers willy-nilly
dabbing sunlight orange
for crossing Erie’s open waters
in buzz, in flutter
with faith in the genes
of their tiny bodies
today they leap
Point Pelee to Sandusky
Ontario to Ohio
nation to nation

Greetings, friends. Roger and I have returned home from a fifth summer odyssey into Canada replenished from our time at Point Pelee National Park and nearby Wheatley Provincial Park on the north shore of Lake Erie. Hiking, birdwatching (a bald eagle! a black-throated blue warbler!), smooshing around our campsite overlooking a creek and its marsh. And the beautiful insects you see here. We all recognize the monarch but I wonder how many of us have seen one that's tagged as pictured above. Yes, that white dot is a researcher's tag identifying the individual for the record books of monarch migrations. I'd never seen such a thing. Imagine affixing it to that delicate wing.

The other fellow is a twelve-spotted dragonfly. He was a new one on me; I had to look him up in my Audubon Field Guide to Insects & Spiders. He too was heading south.

We watched hundreds of monarchs and thousands of dragonflies of several species wing south over Erie's open waters--a two-hour journey for them. We marveled.

Then we cursed, driven out of camp by driving rain. But, we returned home sated on the beauties of these bugs and their pursuit of their evolutionary imperative.


And another:
Posted by Karla Linn at 7:35 AM No comments: