Along the Third Coast


As I've made my way eastward across Montana, through the badlands of North Dakota and into the verdant north woods of Minnesota, Wisconsin and now Michigan, I've spent considerably more time pondering the meaning of place.

Many years ago, in my first book, Midst, I mused on my vagabond life and observed:

"I hear voices. It's been happening over the past several years as I have traipsed up the backwaters & into the wilder regions of the North American continent. As I traveled, I left behind Ruskin's pathetic fallacy that had taught me to avoid imbuing the natural world with human feeling. I left behind the work of many modern poets who have used the pathetic fallacy to ironically emphasize the loss of communion between the individual & the natural world. But I stuffed into my backpack the belief that that communion could be regained & that the natural world could imbue me with its feelings. And it did."

By learning to speak cod and halibut, by learning the languages of mountain and glacier, I was able to immerse myself in place, whatever that place might be, whether badlands or Everglades or....

Recent discussions with backcountry ranger John Heiser in Theodore Roosevelt National Park (North Unit), deepened my understanding of place and my place in it. He is a man who clearly knows his place, his home, having been born and raised in North Dakota and having served 26 years at the ND park where we met. "Where is your home?" he asked of me one day and again on a second day, along with a dozen fellow hikers, many of whom called that quarter of the state their "home." My answer to John came in the form of a poem (no surprise) with a refrain that hammers home my response:

In the moment. In the place.

Since writing that poem, I've continued to ponder the meaning of place, realizing as I've returned to the Great Lakes region -- the Third Coast as it's often called -- that, while I'm at home wherever I roam, I'm most at home on North America's inland seas, if only from habit. After all, I've lived on the south coast of Lake Ontario going on 23 years -- half my life. No wonder it feels familiar, feels comfy.

I also realize now that not all places are equal. Lake Ontario is more home than other homes such as Teddy Roosevelt NP, which was my home this summer for five days for a return visit. The Everglades, where I was national park artist-in-residence last winter, is not so much a second home as it is my holy land, a place where I make an annual pilgrimage to refresh my spirit even while mourning the degradations it has suffered.

A place called Canyon de Chelly in Arizona is also a sacred place that beckons me. It is a place that gives birth naturally to poems as I describe in my essay, "Stanzas in the Stone," that was published this month in the Oregon Literary Review.

Having just spent several days on an island in Lake Superior (conveyed there by the ferry pictured above), today I'm a few miles from Lake Michigan; tomorrow I'll settle in to a campground on the shores of Lake Huron. In another week, I'll tent on an island in Lake Erie. In two weeks, I'll be back "home" on Lake Ontario, a Third Coaster at heart. But add to that tender heart a body and soul and I know I have many places, many homes. I am a creature of an entire continent; I am a being of North America. 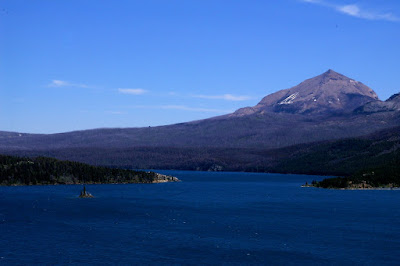 Montana greetings from the Vagabond Poet who is just now resurfacing from immersion in mountains and valleys and more mountains and valleys in Glacier National Park. It's a spectacular corner of the country where grizzlies rule and campers are wise to be cautious. We didn't see any of the ursine family in our four days there, but reports came into the campground of encounters -- all of them ending happily for bear and hiker alike. Word from the rangers is that Ursus horribilis is doing well; it's the glaciers that are really suffering. You look out from an overlook at a glacier then down at the roadside exhibit showing what the glacier looked like 10 years ago, 30 years ago. Today's glacier is an icy ghost of its former self. It's in-your-face global warming. It's in-your-eyes cold tears.
***
***
Still, beauty remains, sometimes in the smallest things that often go overlooked. I found my solace in Glacier National Park thus:
***
***
In the Valley of the Shadows of High Mountains
The active ingredient
in spruce trees
is lichen.
***
Posted by Karla Linn at 1:10 PM 2 comments: